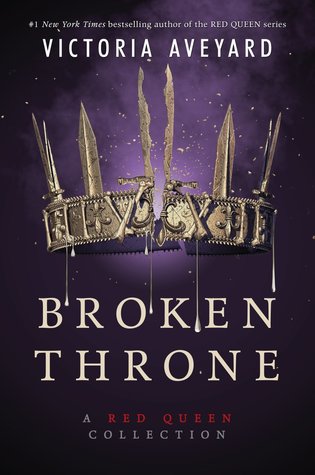 Synopsis: A collection of short stories taking place before, during, and after the events in the Red Queen series.

Do I recommend? If you’ve read War Storm, absolutely. And if you haven’t read the Red Queen series, I highly recommend it.

Thoughts on the individual stories:

Thoughts: This was an incredible way to start the collection. It was a captivating, yet heartbreaking, look at Coriane’s descent into death. Coriane was a really likable character to read from, and it was interesting to see her knowing she is Cal’s mother. The ending was super jarring and upsetting, but in all the best ways. Coriane’s death and the foreshadowing into Elara’s villainy left me with goosebumps. I think Queen Song is definitely worth the read–it isn’t some unnecessary side story.

Thoughts: Unfortunately, this was not so good. I really was just confused and uninterested pretty much the entire read. Farley was not an interesting narrator, the whole point of the events in the story was lost on me, and the reports throughout the pages only confused me. I think story reached a 2 stars for me solely because of the dazzle of the overall series. I would’ve much preferred a more in-depth look at Farley’s relationship with Shade rather than this jumbled mess.

Thoughts: I really enjoyed this novella. The main reason I liked it is that I connected with both main characters pretty fast. Ashe was a really likable underdog, and Lyrisa was a pretty complex character for having only been developed across 60 pages. I also really liked seeing a side of the world that was never shown in the original series.

Thoughts: I thought this was a much-needed conclusion to Evangeline’s story, which ended pretty abruptly in War Storm. I really enjoyed it too; Evangeline was fascinating to read from (as always), and it was nice to get more from Elane, who had been more of a 1-dimensional character up until this point. Also, I was fascinated with Larentia Viper, Evangeline’s mother, who cast a really dark presence over the novella. I would love to read an origin story on her, or potentially a novel in the future where she becomes a primary antagonist.

Thoughts: This was the perfect, and much-needed, wrap up to Mare and Cal’s romance. It was also a really nice way to finalize Mare and Evangeline’s relationship, which is among the most complex in the series. It was pleasantly sentimental as well, as we got to see almost all of our favorite characters in one place for a final time.

Thoughts: The first few chapters of this section were about Maven and Cal’s relationship, the brother bond that drove many storylines, and they were heartbreaking. Maven is probably one of the most complex characters to ever be developed in YA literature. It was really sad to see that Maven really did have good in him, and that his final act before death was to pretend the boy Cal loved was all gone so that Cal did not obsess over trying to heal him. I also really liked the summary inserted where it explained what happened long after the end of Broken Throne. I was particularly touched to see that Cal and Mare eventually had two kids and named them Shade and Coriane. It was also cool to see Jon the Seer have his final moment.

Thoughts: I didn’t love or hate Julian’s notes. There were some that interested me (summary of the war, history of Calore leaders) and some that I didn’t care much about (Farley dialogue). I think they were a good break between each story and did offer some good insight.